HAGD
Posted by TROUBLEnTX at 12:03 PM 2 comments: Links to this post

No Black Friday For Me

I did look online for a couple of things tho... lol. I've had a printer ordered for 5 or 6 weeks, no hurry, and i did find out it wasn't coming. I have a printer, but it's not an all in one, and my scanner is just about gone. Even with black friday prices, they were not any cheaper than what i had looked at. Then i've been looking at vests, lots more comfortable than jackets for me. Found one this morning but the 9.00 shipping made me forget that one! Was at J C Penny.

My g/daughter had asked me to join them for Thanksgiving dinner at her friend's house out at Buchanan, at 2 pm, so that's how i had 2. Our family one is always at noon. I came home and kicked back in my chair, not able to move,,, lol. Didn't make it back to my bro's house for games, nor supper. Watched 2 movies tho.

I'm ready to know what i need done to be better! Somehow, i'm gonna make it thru one of those tests Monday that requires me to lay on my back with my arms above my head for 20 mins. Not an MRI, so i hope it's not as bad. I've sworn NO MORE MRIs. Might take 1/2 a hydrocodone before.  The echo one for my heart takes an hour, the other for the lungs, 3 hours.

My sis just called and she is having a bar b q later today, for her dotter's bd. I think she told me she was 21. Going to Tech in Lubbock.

Breakfast time, yall, so tc, and

HAGD
Posted by TROUBLEnTX at 8:57 AM 4 comments: Links to this post

For the next 2 months, i have so many things scheduled, but was assured i would be like new,,, well maybe. The next thing is doing the sleep study, hate that thot. Can't do it at home like my SIL did, got too many things wrong with me,, lol. That's on the 12-17, then in mid Jan., 3 other things. Also, 2 things here at the hospital, which they will call me when they schedule me.

I was prescribed a nebulizer, which i HATE. Used one before. Supposed to do it every 6 hours, but not gonna get up in the nite.

Proscribed an antibiotic, little wheezing he said, and it was the strangest thing. never heard of it. It was a liquid one dose!...And the way the pharmacist talked when he told me about it, it was measure exact to 25ML. I did, and there was a little left, which i poured in, then thot, better not. So i poured it back in the bottle to re-measure, and missed with some of it. HORRIBLE STUFF. Was the stickiest stuff i've ever seen! I would wash and wash, then find another little sticky spot, kept doing this. I did finally get that 25ml down. lol. Then a horrible taste for hours. It would kinda crystallize, was strange.

I know this is sooooo boring, but it's my record. Easiest way to keep it.

That icy front that blew in with the high winds, was blowing in around my AC in the N window, and i couldn't stuff enough around it to stop it. Not able to heat my house with that. Then yesterday morning i heard the 2 workers next door, and when i saw one outside, i called him over and asked if they could remove it from the window. Took them about 2 minutes. I had it ready, so all they had to do was lift it out and carry it inside. He had done that before i could tell him he could do it from the inside. Wow, what a difference! I tried to pay them but they would NOT take it. I have an AC sitting on my couch... lololol. BUT, no icy wind...........

The lady that lives next door was taken to the hospital 2 nites ago, and last nite it was all dark, so i think she might have been sent somewhere else. I saw on Facebook where she said she had a preferated colon, been making her hurt bad.

My cat, Jude, had been pulling out little hunks of hair all over my rugs by the back door, and my granddaughter had said he was probably trying to bite a flea. I hadn't seen any on him, but,, a couple of nites ago, i did. Then i looked on down his back close to his tail, and there was like, clusters of eggs, or something. Still no fleas, but i sure put the flea med on him! That was where he had been pulling out the hair. Now he has gotten his white hair so dirty where i put the med. not sure when that will be gone. Gonna get a small brush and some water with a bit of Dawn in it, to clean up the cluster spots. Dawn kills fleas... accidentally found that out when i took a kitten home and stuck him in a bath. Fleas started floating immediately. There was no hair on the rugs today...

Posted by TROUBLEnTX at 9:35 AM 4 comments: Links to this post

Got a Good Nite of Sleep

Between my doc and the insurance company, i'm not gonna get that inhaler, not disappointed tho. With it connected to Advair. Seeing the specialist Monday and i can make it that long, i think, lol. If not, i'll go back to the ER.

It's been horribly cold here, and another Artic front coming Sunday. Hi in the 40s today. HEY weather, this is central TX! It's lost it's mind....

I sure miss MsB.

Posted by TROUBLEnTX at 10:07 AM 2 comments: Links to this post

Was told the steroid meds can do this. I saw my doc Tues. and she gave me the pills that will last a week. We tried another breathing treatment with that nebulizer but didn't help either. I'm seeing a specialist Monday, see if he can tweek (her words) my meds, and if i need anything at home for treatment. I also told her i would do a sleep study, and i really hate the thot, but, maybe it's necessary.
When i got up this morning my 02 was 89, then 90, so the pills are taking effect.

My brother came by and put on the AC covers, the old and the new, so i didn't have any icy wind blowing in. That wind is still blowing! Freezing tonite. already in the upper 30s.

I had my house cleaned yesterday,, and ooo boy, does it look and feel good. Especially the kitchen. She's gonna come once a month, which will help so much. I just look and think, gosh that needs done.. lol. Used to clean once a week, everything. Took me half a day just to change my bed, and put my electric blanket on.

It's so late. I made myself some hot chocolate, and ate some kind of little bar thingy. Apple flavored, crunchy. A snack always makes my sleepy.

Got these from my 6 yr old niece,,she's the greatest. I call her Lizzy Dizzy. lol 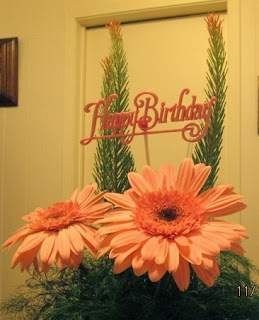 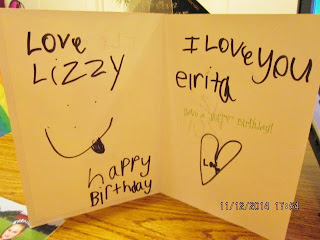 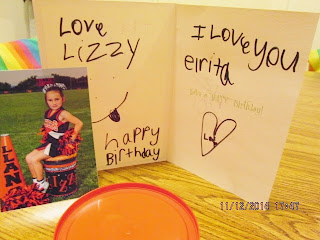 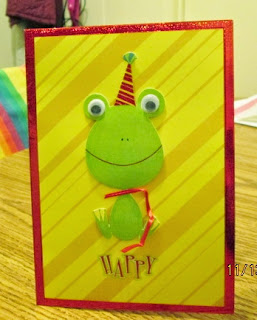 Had to get the card up too.

Posted by TROUBLEnTX at 1:12 AM 5 comments: Links to this post

Had a strange thing happen yesterday. My son dialed a company in Austin on his cell, and when he hit send, my phone rang. I thot he had dialed me, but,,nope. This lady asked for him and it turned out, was from the same place! We did this at the same exact time! I've had someone dialed at the same time as someone else and the 3 of us connected, but ,, not this..

I've been trying to pay my phone bill online since Friday, and the website won't let me. I was on the phone with them for a LONG time Monday, then left. Got back on the phone today, and was transferred just once, (not 3 or 4) and was told i wasn't the only one that had reported this and she would turn it in so they can fix THEIR problem. I could pay it another way, but would have to pay a fee, and WHY would i do that when it's THEIR problem??? She's gonna call me when i can, i have til the 18th.

We're supposed to have lots of rain,,HA! Will report later.

HAGD
Posted by TROUBLEnTX at 10:19 AM 4 comments: Links to this post

Started changing time on stuff yesterday. Now i have to remember what i did, and what i need to do.. lol. I'm using my cell phone, first thing i did this morning, so all will be on the correct time. Only thing i still need to do is my vcr. It did it last weekend, and it's good i noticed it when it didn't come on at the time it should have. I quickly put the hour back.

My forearms are getting those big bruised looking spots, like i'm taking cummodin, but,, not. A friend said it could be the napraxon, and probably is. I had to increase it about a month ago for my hip but not working. The pain is out from the joint, on the side sorta. Hurts when it touches things and i have to shift around when i'm sitting, to find a spot that won't hurt. I remember when i was about 35, and my doc told me,,,,"you're getting older, you're gonna have aches and pains." Was so shocking!! hahahaha Me? Older?

The doc said if that didn't work, i would need to do some therapy. Don't know if i will do that or not!

I've tried and tried to make an online payment for my phone bill, been doing it forever, and it WILL NOT let me. Means i have to call tomorrow and see wth is going on. I haven't set it on the auto pay, i like to see what is coming out of my bank account before it's done.

I've finished all of the Nevada Barr, Anna Pidgeon series. But there are 4 new J C Box, and i got 3 of them. It's like i just read the previous ones! Finished one of those already!

Deer season started yesterday, heard shots from the river, and 2 blocks E is out of city limits, so hunters around there too. It's packed here in town, but not like it used to be. Back then i didn't get out on that Friday afternoon, was crazy, dangerous to drive. The price of gas and the leases did it. You can hunt on the river for free. The deer know days ahead and get crazy too, and get hit running out on the roads. This county is the deer capitol in the US. They come up from the river, around here, i see the tracks all the time.


Posted by TROUBLEnTX at 9:03 AM 5 comments: Links to this post