This is a big creek with a slab, just west of town in a development, that still has water. 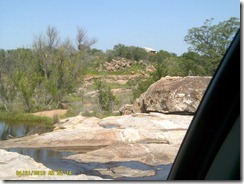 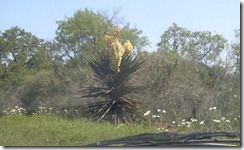 I don’t know what these blue flowers are, but so pretty. 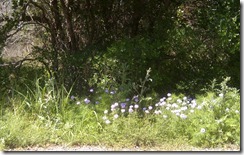 For DD, pics of paint brush, mixed in with the bluebonnets. 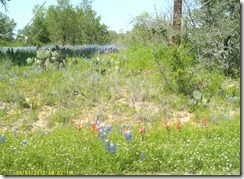 I kept seeing this, there’s some across the street from me here in town too, and it looks like someone had just splashed paint out.  It is dead grasses blown over, but, unusual. 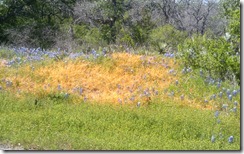 And,,, the new community center, with the inside arena.  Has to be ready by the time of the crawfish open, and I’m not sure of the date, but think it is the 20th-21.  I would think it needed 24-7 to do that.

My son called me about 6 pm, because he had just thrown up quite a bit of fresh blood.  I told him if it happened again to go to the emergency room!!!  It didn’t, but I worried all night, called him later, and then this morning.  The shots he has to take for his back, causes this nausea almost every time, but not the bleeding.  Almost has to be an ulcer, and I told him to get to a doc TODAY.  They are planning on going to CA THURS!!!  I will update later.

Posted by TROUBLEnTX at 10:24 AM 6 comments: Links to this post