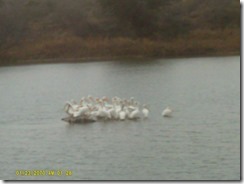 I got out to the park a couple of days ago, and saw this all white rock, and not one turtle on it.  I have never seen these pelicans here before.  Just while I was sitting there watching them more groups kept flying in and landing up the river from these.  Too far for my camera, but had to be between 60-80 by the time I quit seeing them coming.  After a while most of them flew on down to the dam, and landed just below it.  WOW!

I went back yesterday and they were still there.  Like I’ve always said, you never know what you’ll see in this river.  Bro B said he was walking down the road from his house, which is in a pasture, and it was night time a few weeks ago, and he heard this noise that put the hair up on his neck,,and he went home!  Said it sounded like some kind of big cat.  The house is the last one in the city limits, and just 1/2 block from the river.  And yeah, we know there are such things around…N sees them regularly.

My dotter here in town, blocks from me, has 2 great horned owls there a lot.  There’s a huge creek by her and it’s been left in the wild, all grown up.  One just sat there in the top of a tree and watched me the other day.  I hear them from the river, over the hill from me.

We raised one one time.  Went home one nite and he was walking around on the street, under a street lite, eating crickets…lololol.  Most fascinating thing we ever raised.

Posted by TROUBLEnTX at 11:02 AM 7 comments: Links to this post