This is What MY Mother Taught Me,,,, 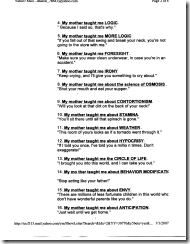 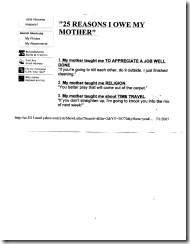 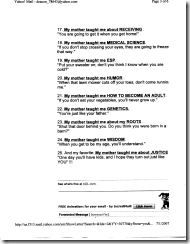 Posted by TROUBLEnTX at 2:39 PM No comments: Links to this post

This is What MY Mother Taught Me,,,,

Posted by TROUBLEnTX at 2:39 PM No comments: Links to this post

BB was talking about painting Sadie Mae's toenails...lol.  I did that one time on one of my siamese.  She kept nosing around getting in my way while i was doing mine,,soooo,,,she got HERS done..She did NOT like it, but from that day on, when i just opened the bottle, she was gone!  She also made a mad dash when i just turned on the bath, so i guess she had one before i bought her as an 8 week old kitten.

She would be underfoot in the kitchen,,yowling,,so i got a water gun,,and ,,,one shot was all i ever got in...just squeezing that trigger,,,she was GONE...

She was a seal point,,black trim,,i call it.  Jumpy, skittish.  The lighter the points, the calmer the cats.  Frost points the calmest of all, no fear, laid back.  Jude is a red point,,,even tho it's yellow.  I raised them for years, but never fooled with papers, just sold them for a small bit of what they were worth.  BUT,,i was so picky.  The line i had were from some in Round Rock that won shows.  They were so unusual in looks and personalities, they were like no other cats.  Even my vet said they shouldn't be classified as cats...lol.  The last frost point i had, was the smartest cat i ever had, but for his dad.  When i moved one time, he was at my Mom's when i went to work, and he disappeared.  I know someone stole him.  He was at home there too.

Don't know what happened, but from one time to the next,,,getting up,,my feet quit hurting...  No pain when i walk..thank you God.

When that rain came late yesterday, i killed about 10 or 12 more flies in here!!!!  Where did they come from?  That strip has ONE on it today.  I even squished one on this screen, had to clean it.  Does ANYBODY know how i can get rid of them?  HELP!!!   I've never seen anything like this.  Swatted 3 or 4 today.  Is there fly bait, like roach bait?  These strips do not attract them like i thot they would.

On my ustream today,,,petespond,,i saw a herd of giraffs...This is the best one i've ever had on there.  Saw a herd of elephants a few days ago.  http://www.ustream.tv/petespond.,  So instead of just reading the paper with my coffee, i'm staring at this....lololol.  Check it out,,see what you think.

HAGD
Posted by TROUBLEnTX at 12:28 PM 2 comments: Links to this post