Guess What I Have

Don’t know if I should keep carrying my camera around in this bag or not. lololol.  I’ve always kept my poker change in one too.  Sorry about the blur,,really wasn’t a bottle in there. hahaha 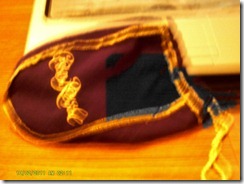 This is what I saw facing me when I got out to Ns house.  Had been an 8 point one, and one shoulder was ruined, not there. 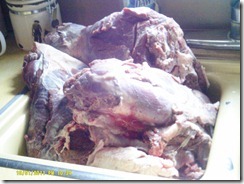 This is the finished product,,,a couple of hours later.  All bagged, marked, ready for freezer.  I brought one home with me, will be cooked TODAY! 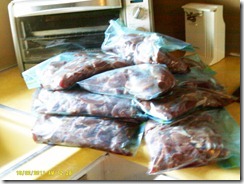 Been doing this since wayyyyy back, when I was first married.  We lived on venison for a long time.  Illegal ones,,but,,we went out and got one when we needed the meat.  I still love it.  I learned way back then, how to cut one up.

When I was cutting on something, this little black thingy showed up, sticking out a little bit.  I showed N, and then,  I kinda pulled on it,,then when I pulled harder, it came out,,,it was a thorn! about an inch long.  OMG,,,never had seen something like that.  No telling how long it had been there.  I was just amazed!  Have no idea what part I was cutting, think the shoulder.  When something like that is in somebody, it will eventually just go away, so this one hadn’t been there all that long.

With weather like this, today, I should be outside, if nothing else, reading or something.  Got my oatmeal ready, not gonna cook the venison til later.  Gonna cook half that bag, which will do me for at least 2 meals.  N kinda divided it up to make one meal for them.  That was a really big buck, but that meat was so tender, like a spike.  You could tell.  The knives had been sharpened really good, but still, it was tender meat we cut.

Talked to that niece yesterday, twice, lol.  When I first called, they were at a Chunky Cheese with a big bunch of kids, doing something, so we talked later.  Planning on going over to Goldthwaite, to visit when they come down in a couple of weeks.  That’s about 60 miles from here, within a day’s drive.

You know, I  never did see hunters around this time.  Just don’t know what to think.  Saw more late yesterday, leaving, than any other time.  Just didn’t have em this year.  Unreal!