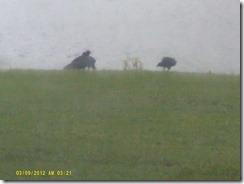 I guess they’re finding something on that fish skeleton.  That’s the one the girl left laying. 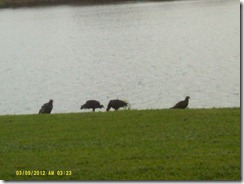 Guess it’s gonna be kinda hot today, with that sun out.

Found out late yesterday, there was another get together for my son’s birthday,,catching the ones that had misunderstood the date.  Went to a mexican food restaurant in Kingsland, and it was soooo good.  There were 12 of us,,and in that small place it was a lot!  Lots of people waiting to get tables.  Someone had called ahead so they had ours ready,,,sorta,,lol,,had to add another one, which a couple nearby was so kind as to move and let us have that one.  Tried to buy them drinks, but  they already had their tea and water.  Son still had the folder full of pics I had taken the last time, showing them.  He’s going to put them all into his puter.  I ordered a chili relleno*  plate and it was out of this world!  And all I could get down was just a small bit.  Have the rest to eat on today,,,yeaaaa.  This place is more authentic than most.  Their fajitas looked fabulous, especially the shrimp ones.  Cooked with lots of onion.  Yummmm.  Everybody hungry?  Know where I’M going when I want mexican food.  Got back by 8 and watched a movie.  Did I tell yall I watched one on Fri, and it ended before 10, and I was letting the tape run,,wellll,,,I got into Seabiscuit and had to watch the whole thing!  A great movie.

I hate this time change right now.  I just ate breakfast and it’s 1:25.  Not good.  Haven’t even done dishes yet.  Let alone get dressed.

Spent too much time trying to sign up to pay my Atmos bill by draft.  After all of that, it told me I had to call tomorrow!!!  Used to do online banking but then the bank started charging for it,,so bye bye.  I have free checking  now, and when my son asked, I told him my bank.   No bank charges at all, and no minimum balance.  Moved from the bank I had done business with all my life cause of that.

His gf found a job with the school system last week, and will be starting on the 19th.  She works with disabled, mentally, and is super at it.  I could  never have done that.  Now, working with seniors was my thing.  Loved it.  They have lived twin lives, she in CA, him here, and never knew it.  Done the same things, like the same things,,,it’s amazing.  She was born here, and was his gf in the 5th grade,,,lolololol.  She left when she was 15, and they had never seen each other, nor talked from that time, til she came back.  I hear wedding bells,,,lolololol.  We all love her tooooo.

Guess I’m gonna see what I can get done before the DAY is gone.  So yall tc, and

Posted by TROUBLEnTX at 1:50 PM 4 comments: Links to this post