Thot it was my puter, til I read that others were having problems loading blogs, too.   It’s fine with me, if they’re doing some improvements, just get it done!.

Went out and fed these, they were upriver, but swam down to me when they saw me,,,lolololol. 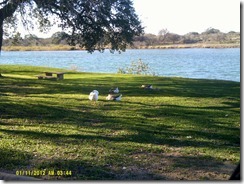 Then,,after they ate, they hovered around and went to sleep.  You can see in the middle pic, the white one asleep on one leg, head under wing.  They hang around til I leave.

Someone mentioned shingles today, and I had  them about 12 years ago.  Most painful thing I ever went thru.  Every 4 hours I took vicadon, which is something I hate, but with that, you take whatever you can.  They were from my navel around to my spine, and NOTHING could touch them.  I wore an old pair of sweats, low.  Couldn’t sit, either, couldn’t lean back.   I think I got them after falling about 2 weeks earlier, set them off.  Was misery.  They would wake me up during the nite, and I would walk the floor, waiting til I could take another pill, tears rolling down my face.  After they erupted, the pain got better.  They start down deep, on nerves, and travel out to the nerve ends, erupt in blisters.  The “down deep” is the WORST.

Don’t know what I’m gonna do, if I keep finding good blogs to read.  lololol.  I’ve added several, now more time is spent on them…

DD has me worried, you don’t let blood pressure get that high.  NOT GOOD DD!!!  I hear ppl calling EMS all the time with it not even that bad.  The worst I ever had was about 200/105, but that was before I started treatment.  Now it’s too low, I think.  Like,, 100/55, or something like that.  I don’t do a regular check.  I just keep trying to get my Doc to take me off meds.. LOLOLOL.  She took me off Atmos about 2 months ago, and now, you see commercials about that, saying call if,,,so n so.  If I were you DD, I would be in that Doc’s office, or an emergency room.

Read that homicides as cause of death, has been replaced by pneumonitis,,,Never heard of it, but,,,it’s what I had when my band was too tight.  Aspirated pneumonia.  NOW,,,what am I gonna do?  AND, I don’t know if that one time pneumonia gave me a permanent disease, on top of my COPD.  Gotta do some research on it.  Supposed to get this thing tightened again, next Tuesday, just a tiny bit tho.  What to do, what to do?..

Gotta do that, so yall tc, and

Posted by TROUBLEnTX at 12:52 PM 2 comments: Links to this post