Slept thru this, but when i got up during the night, i could see some of it. Thot it was just a big limb blown off. News said wind gusts of 61, 60 mph. Hate losing this one, shaded almost the whole west side of the house. 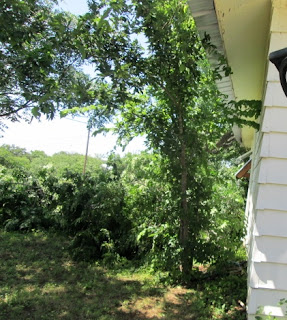 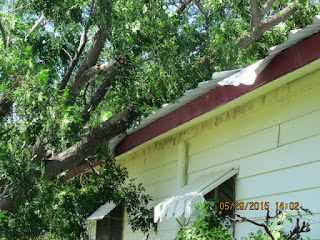 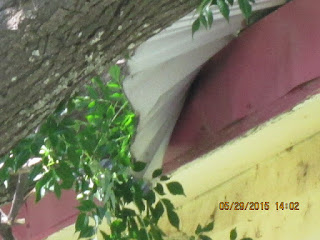 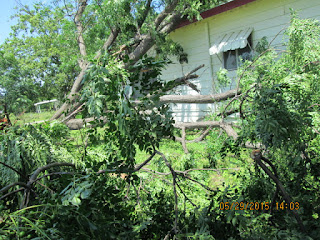 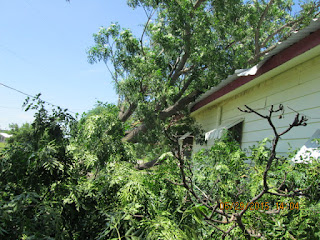 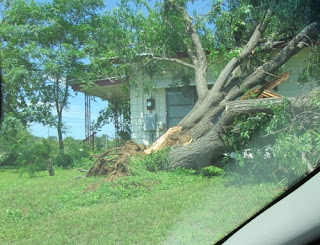 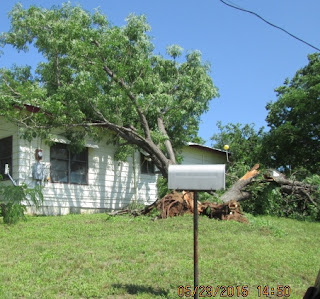 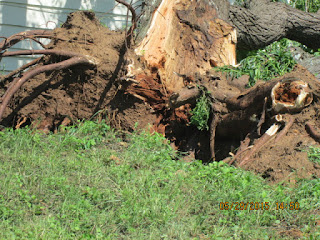 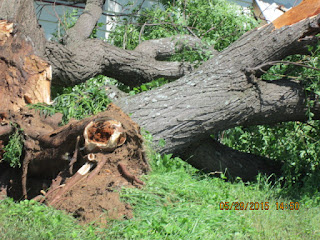 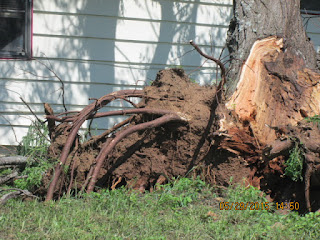 I called my insurance company and was told to go ahead and have my bro look and do an estimate. He just now showed up, been in Ausin, and said probably not much to fix it.

HAGD
Posted by TROUBLEnTX at 4:41 PM 6 comments: Links to this post

Nailed it.  He put an ephidural into the bottom of my spine so it would go upward and cover several disks, and it has....Almost immediately. The first 2, over a period of 2-3 years, in the hip did the same thing, but,, not this last one. Had to be into the spine. Eventually the openings on the spine where the nerves come out, will close up enough, it will take more than these blockers.

We've been having heavy rain most of the morning, so glad. We've missed the heavy stuff before this, and this area is where it's needed to refill the lakes.

Just now seeing the amtrac derailment on the news. Wow. Really bad. Up around your home area, DD.

Cleaned my ceiling fan this morning,,,,YUKKK, Why do i wait too long? I run it on low during the winter to push the heat down, then medium all the other times. That thing has run since i moved in here, almost 14 years ago.... good one, huh?

It's been cool enough, i dug out my fleece robe again... hahahah, just got it washed and hung. Feels darn good too.

Ok,, know these are boring, and no one except DD reads them, but there it is. Thx DD.

HAGD
Posted by TROUBLEnTX at 11:30 AM 7 comments: Links to this post

Been quite a while since i posted.  Been in pain most of the time, but seeing the pain doc tomorrow. Dreading it, since i'm using the bus, and those seats make this hurt. Gonna take a full hydrocodone for it,,lol. I just take a 1/2 normally. Sure hope he does that ephidural? injection into the spine, and it works. There was talk of an MRI, butttttt........... how in the world am i supposed to lay on my back for any length of time?

Still don't have that thing that goes around my head to sleep with. I just called and was told they would get back to me and set up an appointment... MERCY!!!!!!!!

My son's leg is getting better every day. He's been home about a week. He can lift his foot about 5" from the floor now, and put a little weight on it, holding on to the walker. His back is fine!

Well, we finally got a little rain. All that forecasting, missing us, then about 4:30 it started this morning, rained hard for about 20 minutes and quit. I finally got up about 6 and then it came again. Maybe more later. Just heavy rain so far. Worst thing, supposed to do this tomorrow when i go to the doc.

Need to go to the grocery store, and just can't make myself do it.

Ok, this is why i'm not blogging much, soooo boring! Yall tc, and

So tired of doing doctor appointments!! These last 2 made me miss my nap, NOT GOOD. Hadn't realized how much i have to have my naps.

I thot i would have to do another sleep study, but,, Wednesday, my doc told me it had worked great, and i didn't quit breathing once, wearing the first one i had that nite. It stretches around my head and goes into my nose like an oxygen hook up. And the oxygen hooks to it. The second one i tried, i couldn't do, smothered me. It was a mask type with an air flow so strong, i couldn't breathe with it. I'll get it in a week, had to be ordered. Next appointment,,,, 7 weeks...lol

Then yesterday, saw the one here about my hip, which he told me wasn't my hip, and nothing could be done!  WAIT A MINUTE!!!,,, A person can't live with pain like this. He is gonna talk to my pain doc and see if he can put an injection into my lower spine, which he thinks is the problem. Meantime, barely can walk, pain goes down into my foot, making it so i can barely use it. (son told me that's how his back had done). Just do something, somebody!!

Today, i'm sitting as still as possible, taking pain pills with THEIR side effects, trying to recuperate.

Son has been in rehab for about 10 days, and is coming home tomorrow, even tho his leg still won't work. They told him it could take several months, and the blood clot was probably what did it to the nerve. He's the type that will overwork himself on therapy to make it work. He'll have a wheel chair, and maybe crutches. And maybe a leg brace he thinks would help a lot. His back is FINE.

I need to go to Walmart in the worst way, too, BB, but just don't have it in me yet. Got a new prescription for my glasses i need to check out there too. Even some shoes maybe.

I swear i heard a cow outside this morning.  lololol. I didn't get up to look, (told ya, sitting still). There's some up the street about a block.

My neighbor's mad at me for asking what was wrong with her 3 lb yipping yapping dog... hahahaha. They're the worst. She told me she was gonna trap my cat and have the city pick it up for disturbing her.... HA. Not my cat... lololol. But now, she shuts that  (*&^$#Q dog up. How can people stand their own dogs, doing that???

Well, i know it's not much but yall tc, and

Posted by TROUBLEnTX at 10:19 AM 9 comments: Links to this post