Yep, found out im still sane. Told him my only problem was age,, then i told him not to ever get old...hahahaha,,, that sure didnt come out right. He had just gotten  married, going on his honeymoon next week. I also gave him some advice about raising kids, and,, he wrote it down! lmao. It was,,, play with them, that's what my Dad did, and i still miss him doing that. My nephew asked me when his first 2 girls were very small, and that's what i told him too, and he did. Has 3 great kids.

Got a call on the way back, and it was someone telling me they had scheduled me with the wrong doc for Monday, so they had to re-do. Now it's Wed. i hope, depends on the bus service. I needed an orthopedic spine doc, so now thats what it is.

There was a McDs next door and the driver took me thru the drive thru, and i got a salad that was sooooo goood. Wish someone here had something like that. Just ate about half, so had the rest for supper.

Boy! That riding just about kills me. I had to take another pain pill at bedtime, but boy, did i sleep. After getting home, it about killed me to have to get up and walk at all. Just woke up one time, thats really rare.

No great gran yet... overdue since the 21st. Mine were all about a week late, so just add it on from the get-go....

HAGD
Posted by TROUBLEnTX at 10:00 AM 6 comments: Links to this post

What i Found Out

Well,,, hells bells! Ain't no quick way to fix my pain. I have to see 2 other docs before i know what will be done. Maybe surgery to fix the problem... maybe that stimulator to take care of the pain.

Not only that, I have to go to Round Rock to see them. One is orthopedic spine doc, other is a psychiatrist. Now, I'm not all crazy,,, yet, but Medicare has to butt in and he's a requirement. Makes no sense to me.

I haven't seen Jude since yesterday morning. Not sure what he's up to, he's done this before. He's a good hunter, so when he gets hungry he'll show up.

Gotta get thru this, America's got Talent is coming on. Not liking Idol or So You Think You Can Dance any more. I think they are closing anyway.

HAGD
Posted by TROUBLEnTX at 6:39 PM 3 comments: Links to this post

Burnt Plugs for my Dryer 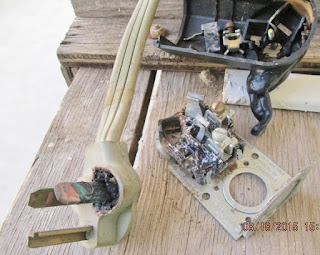 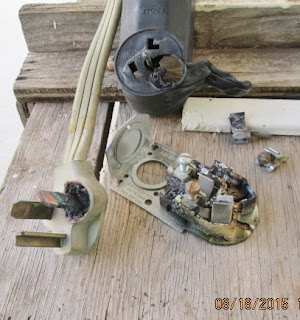 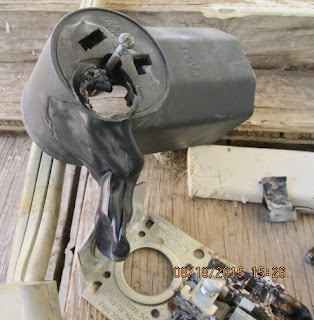 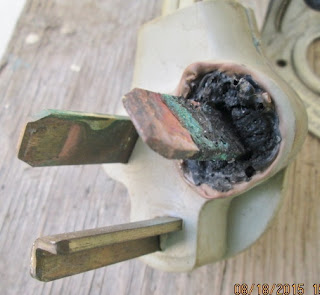 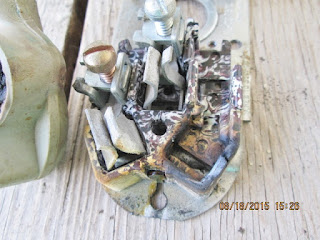 My brother changed these out this morning. Now i have a working dryer,,,, lol, threw a good one away and bought another one at a garage sale. Then, it didnt work either ! When he was looking at why it wasnt working, was when he saw these.

Remember that little bitty snake looking thing i had in my dining room? Was a year or 2 ago, and i put pics on here. WELL, Had one last week, and again yesterday. Other brother told me they were worm snakes. When i looked them up, yep, thats what they are.

Now, this.. It hopped across my living room, went behind my tv stand. I put a trap out, and a week or so later, Jude sniffed in the direction of the trap, so i looked the next day. (forgot then). It was laying about a foot from the trap, trap was thrown. Havent figured that out yet. Looking them up online, i thot it could be a kangaroo mouse, but the end of the tail isnt bushy. Not a plain mouse tho.

I sent a note to my doc im gonna see next week and asked about that radio frequency ablation. Havent heard back, but sure hope she does SOMETHING when im there on the 25th.

Posted by TROUBLEnTX at 4:59 PM 2 comments: Links to this post

Still the same ol, same ol. But gonna try to do a new post on here.

Been staying in, mostly. Its a wonder i dont have cabin fever haha. Have lots to occupy time after i do my thing on the laptop. And one of them is a nap,,, and its about that time....

I check into facebook several times a day. See what everybody is up to. About the only way i can keep in touch now. Nobody uses the phone any more, to stay in touch.

My great, OMG, granbaby is due on the 21st, a boy. Didn't think this would ever happen. Bet he's gonna be one of those red-headed, blue eyed kids. A friend has a grandchild that is soooo beautiful. Most unusual coloring, really rare. But this one could be like that too.

The shower was sooo fun. It was called a tie-dye baby shower, and you took something white or light, to tie-dye. Some beautiful creations. First time ive ever done it, but was told it was one of the best.

My dryer quit on me about a week or so ago, and i found one at a garage sale last Friday, bought it, got it delivered and hooked up, and NOTHING!!! Well, it ran, but no heat. I was told by them that it had been working prior to the sale, so i think something came loose. Maybe my bro will look at it. I know the ones having the sale, and i believe them. It was moved twice,, once there, then here.

Im still recording movies and some other stuff. Sometimes when i see the movie i dont watch it, just delete and go to another one. Had 2 to do, today. So about 5 nites a week when theres nothing on TV, thats what i do. I like a lot of the shows about Alaska too.

Cleaned my AC filters today. Let it go about 10 days. Like to do them once a month. By doing it on the first, i can remember, haha.

My doc talked me into doing some overdue tests, but i called and canceled the bone density one today, would take almost an hour, and since im still having bad pain in the hip, leg, just not gonna do that now. Will later. Did one about 12 years ago, and was great. Got a pneumonia vaccination, just on time. Theres 2 to do now. Got one,,, guess im good.

Just because im not doing a blog every day, doesnt mean im not reading them. Do that every day. Its just nothing new to write about, YET. haha. Ill get there.

HAGD
Posted by TROUBLEnTX at 12:39 PM 5 comments: Links to this post