This little friend had no fear of me.  Check out my post on 9-20-11 for a story about one we called Teaser. 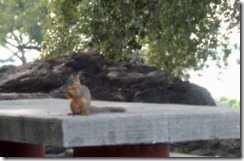 Also, on 8-13-11, I told about being hit by lightening,,IN MY HOUSE!  I still look around me when the lightening is bad.  I also saw a portable phone blown to smithereens once, so I sure don’t like to be on one  in a storm either.  And here my son was, calling me during one of the worst bouts of it the other nite. lolololol.  I kept saying, we gotta get off these phones,,and I think a cell is worse.

I’m still watching, and waiting on my trees to see how damaged they are.  Not sure about the hackberry in front,,,it’s half way leafed out,,I mean, like on half the tree.  They’re tough trees, like mesquite, so they should be ok.  Have to laugh about my chinaberry trees.  Have a huge, old, one on the West side, and have put others out too.  They are fast growing, but not so tough.  I thot.  There’s a young one, now about 2 or 3 years old, behind my store room, never had a drop of water except rain, and you know how that was, last year, and that little thang is thriving!  I’ve added 2 more on the West side, need all I can get.

Saw where they have quit the,,,kill the donkeys, down there in Big Bend.  I signed the email,,,lol.  Couldn’t see any sense in killing off one species to bring in another.  Hope it works this time, didn’t the last one.

Check this site out, and go to the leanwashingindex too,,,

DD, I don’t have nothing to say!!  lol. How can I also write all this bunch of bull, with nothing to say?   Feeding my addiction,,that’s how.  I think we’re all in the same club right now, thinking this.  But,,, I don’t find any of yall boring!!!  I need to post more pics, but I just don’t get out enough to get other things.  I will try to do better.

I think we’re supposed to go out somewhere for supper later, but haven’t heard from my son and gf yet.  She started her new job Monday and loves it, but I know she’s worn out not getting enough sleep too.  But supper shouldn’t interfere.  We all eat early.  She also works with kids,, in the school system,,autistic ones at that!  She has 3 little ones now.  That girl is loaded with patience.  lololol,,,I would’ve lasted 2 minutes,,,maybe.  I took a strong pain med last nite,  got a good nite’s sleep.  Had to.  Best sleep I’ve had since the time change.

Posted by TROUBLEnTX at 11:54 AM 2 comments: Links to this post