This little doodlebug has worked really hard.  I put this mat down a few days ago, and he just found it irresistible,,, lol
See those huge boulders he threw out?   Glad it's not my size,,,lol 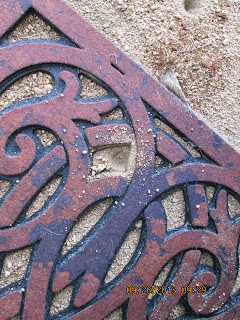 My floor mat in my car kept getting overloaded with this gravel, soo,,,when I saw this mat on sale at Alco, I thot it would cure the problem.    It's heavy and won't blow away also.  AND, I won't mess up the little homes they make,,, love it.
] 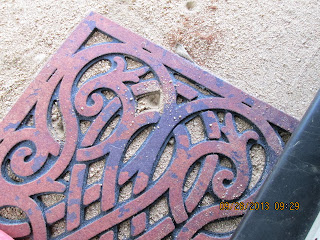 I'm waiting for all this heavy rain we're supposed to get today, tonite, and tomorrow,,,It's dark in the West but not sure if  that's all of it.  I think it's coming down from the NW.  Need to look I guess.  I went to the store and got milk and my ice cream, so i'm sure ready for rain.  That last we got just raised Lake Buchanan a couple of inches. It needs 25 feet,,,not a good thing.  It will take hurricanes dumping water on top of us for a few days, to make a difference.  This hurricane season has been so weird.  DD,, not wishing you any tho.

That ol sciatic nerve has been acting up for a few days, and i'm not sure if it's because I cut down on the Aleve.  It's NOT my hip thank God.  Ok, no more of that. 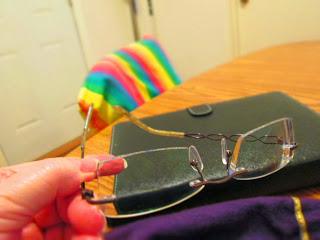 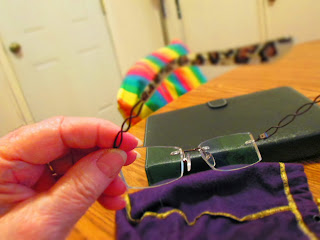 These are the ONLY ones I liked, out of all they had, and wasn't sure about the way the lens are held in place, but after I finally got them by UPS, (took 8 days) i'm kinda getting used to it.  They do need just a little adjustment, mainly to hold them a little higher up, but I wanted the rimless, so I have to put up with the attaching ways.  (Don't care for that leopard print at all, but it's just a little, and if I had hair over my ears, you couldn't see that.
Anything else I need to catch up on?,,,,,Not that I can think of.  My son's Medicare started on 9-1, and we had done another Medicaid app, and he was turned down because his check was 42.00 more than allowed.  So,, had to start looking for what to do for that 20%, and with him under 65, all he could get was Medicare Advantage,,,Whew.  Not to get into that, found out there's not a whole lot of choice, but one, Humana, was 59.00 a month, the other free so got THAT done in time for it to start 10-1.  Not sure if any of them will be much good, but definitely the free one is better than nothing.
Was nearly some excitement here, heard a vehicle versus building at the Dollar General, but turned out it was in Kingsland, not here.  Maybe 2 injured, then nothing else.  There's a man that posts all that stuff on Facebook, so guess i'll look.
Yall tc, and
HAGD