My management of time is getting worse, i tell ya.  Since i don't HAVE to manage it, it just gets away.  I was up about 8/30,,and here it is, 1 pm,,and i'm just getting started here.  There were a LOT of blogs to read,,,that's why.  And comment on.  I thot i had a problem with my keyboard, but after lots of time spent trying to correct it, finally realized i didn't have one to start with.  Now,,go figure. 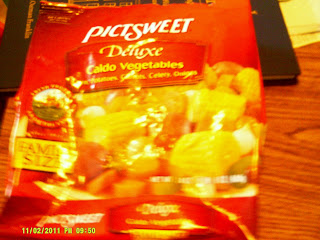 Cooked a bag of veges, big hunks of em, and used the rest of that beef broth.  If you look, you can find all kinds of new things at a big market.  Like these, in the frozen section.  Gonna have em with some ham steak, potato salad i keep on hand.  I need to correct the date on the camera,,don't i?,,,lol.  Never been interested in doing pics, especially with a camera, so i'm just not good at it, so what you see is what you get.  That or nothing.. I see all these good photographers on here, and then,,i put mine on?  Gosh,,what am i thinking?

Years ago, like 30 or more, 2 women here, wrote a book and put lots of old pictures in it, about our town, the history.  This year, they did an extension, and added about 52 more pages, with some old old pictures.  I found one that l especially love, and it was taken before the dam was built, right here in the city!!!  Pre 1892!!!  I didn't even know they could take pics then.  Most of the new part is about the North side, and it's heyday.  That's where the train brought in passengers, a huge hotel, and lots of other businesses.  Fascinating.  I got mine back weeks ago, at a book signing.  Still not all the way thru it.  Anyway, i had it with me yesterday, and stopped by the car lot, and showed my x that picture,,He said he had been meaning to get one too, just hadn't done it.  Welllll,,,since our 2 kids never know what to get him, i called and told my dotter, but she had already gotten his gift.  Later, my son called, asking about it.  I told him how to get one, so maybe my x won't buy one before then,,and i warned my son.  O well, each could have one,,,,There won't ever be any more.  i typed the manuscript for the 1st one, and that was before computers!  For doing that, i was given 4 copies, so each of the kids have their own.  Well, i have 2 now.  3 if you count the new one.  Going thru my Mother's things, i found hers, and gave it to my g/dotter.