Watching the weather, we're not gonna get anything, typical.  My man is here mowing, gosh, those weeds grow fast.  I put the round up on some of them yesterday.  These showed up here a few years ago, and bloom out, have burrs that dry out and then,,if you step on them you will end up with your house full of them.  You just can't scrape them off your shoes.  Horrible things.  And they are everywhere, not just in my yard.  With all the traffic at my bro Bs house it was full of them.  I told him the only thing i could think of was weed and feed, and it worked pretty good.

Got my bill for car insurance, and i pay it in 2 payments of 179.50.  That's just what i have to have to get by with.  Liability and comp only.  That's for a year.  That and my house insurance are the 2 most expensive things i have.  No mortgages, just regular living expenses.  Gonna check when it comes due later, because i sure don't put many miles on it.  I think there's a new discount for that now.

Pics of the weeds i'm talking about.  Barely got them before they were mowed down.
Weren't any doodle bugs yet. 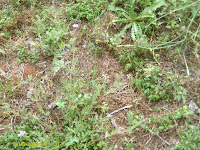 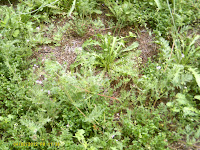 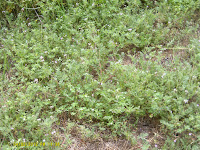 Jojo was talking about coyotes there in town.  They are, here, too.  My son rode his bicycle around during the late nite hours, and would see them.  What i really miss, tho, are the armadillos.  Back in the 80s, someone came to town and offered 50 cents each for them.  I guess that just about wiped them out around here.  My son told everybody, he'd better not hear of anybody killing them for that!  I blame the fire ants for the loss of the cottontails.  Then, there's a LOT of stuff gone out of the river.  Like, mussel shells, crayfish.  Used to find the tiny mussel trails in the sand,  and you could find them that way.  No more, not there.  Like, doodle bugs,,lololol,,,still have those, they EAT ants.  We, as kids, used to have contests, to see who could find the smallest ones.  Used a straw or piece of grass to make them move.  I was in my 30s before i knew they turned into a dragon fly like thing.  And that grub worms turned into June bugs.

I will update later, after my son sees the doc.  He hasn't thrown up any more blood, because he wouldn't let himself do it, but it shows up in urine and stools.  He called earlier, said he hadn't slept but a couple of hours in 2 nites, was going to nap til the appointment.

Made myself some chicken salad this morning, and just had a sandwich, with a few frozen fries i baked.  Trying to unload my freezer, and it's getting on down now.

BBL, and yall tc, and

He was gonna whip their asses, if they killed armadillos.  He came by after doc's visit, had 2 different medications, and 2 more prescriptions to fill.  Took all kinds of blood tests and will know tomorrow about an ulcer.  I didn't know they could do that with a blood test.  She's treating it as one.
Posted by TROUBLEnTX at 12:57 PM